Every year the Hireserve team embark on a Summer Social event of some kind that encourages teamwork, creative thinking, and friendly competition… for the most part.

But this year we wanted to do something a bit different. Instead of cramming all our ideas into one day, we decided to have a Summer Stretch week. The concept was simple: we were divided into four (not so) evenly matched teams and would participate in daily challenges that would stre-e-etch our minds and bodies in order to gain points for our respective teams. To keep the momentum going we also had a steps challenge running alongside (pun intended) the daily activities, in which the team needed to stretch their leg muscles to increase their points tally. 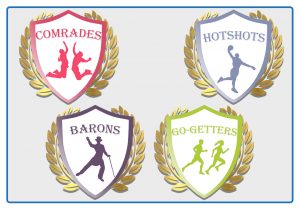 What better way is there to start off the week of activities than with a team quiz!? The questions consisted of general knowledge, the history of Hireserve and some of the lesser known talents possessed by the Hireserve team. Who would have thought that our Head of Services Rob, could turn his eyelids inside out…

The ‘Salt Box Barons’ team won this one, taking an early lead for the week and clearly demonstrating their thirst for knowledge and sharp Monday minds.

Tuesday was meant to be treated as a rest day, but that didn’t stop the team from getting their steps in! Walking to the shops instead of driving, taking a stroll round the park in the sunshine, taking Mabel the office dog for a walk… Leg day never ended! 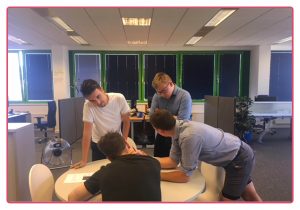 Wednesday was all about brain power. Each team attempted to solve a collection of puzzles to earn more points for their weekly total. These ranged from word-searches and riddles to math problems and spot the difference.

By this point, rivalries had truly manifested amongst the teams and the competitiveness was hotting up. The Barons went as far as booking out a meeting room just to crack the final puzzle. Some called it procrastination while the Barons called it ‘vital teambuilding’. Either way, it resulted in them winning the challenge for the day and increasing their lead for the week. 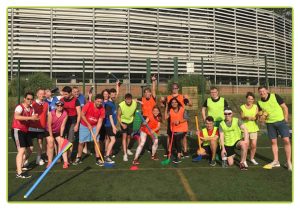 If rivalries were hotting up on Wednesday, they had reached boiling point by Thursday! It was time for the main event: School Sports Day. It was a scorcher of an afternoon but with the mental and physical preparation from the last few days… we were ready. Everyone knew the Barons were the ones to beat; could they really win the battle for mind and body?

The ‘Earls Green Go-Getters’ team looked to challenge the Barons by winning the first race of the day, but there was no time for optimism. The games came thick and fast, consisting of egg and spoon, relay, 3-legged race, sack race, javelin throwing, hockey dribbling and a beer goggles run (which some of the team had more experience in than others…).

The teams battled hard and fair for points, desperate to give the Salt Box Barons a run for their money. Helen’s battle cry could be heard for miles, a valuable trait for our Communications Executive and as the ‘Cabaret Comrades’ team captain. But despite all the teams’ best efforts, it was once again the Barons that emerged victorious. Their team captain and Marketing Manager, Hannah, let out a borderline ferocious roar of triumph as other teams begrudgingly applauded. 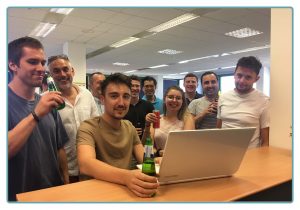 There were some aching limbs and tired minds on Friday, with some of us still reeling from the School Sports Day results. It was time to cool down after week-long stretch, and what better way to do that than with an open bar? At the stroke of 4pm the Hireserve bar opened, filled with beverages and snacks for the team to unwind and reflect on the days before.

While the week was dominated by the Salt Box Barons, it was a week of cross-department collaboration and wellness. The Summer Stretch week gave us so much more than a generic, hour-long teambuilding exercise. Instead, it encouraged ongoing conversation, debate, and exercise.

Even with a close-knit team, we value the importance of taking people away from their desks and developing a more personable relationship with one another. Company culture and wellbeing is at the very core of what enables our team to flourish, and the Summer Stretch week opened our eyes to ways of maintaining that core. Simple gestures such as chatting with a colleague instead of an email, have an out of office meeting or socialising after work; these are just some of the everyday acts of consideration we’re seeing more of in the Hireserve office. Many of us are continuing to stay active by walking to the shops instead of driving, cycling to work, signing up for park runs and even joining the local gym!

So now the week is over and the competitive trash talk has died down we look forward to the Summer Stretch week next year; if we can wait that long… table tennis tournament anyone?

Discover what we got up to in a previous Summer Social…

Find out more about our amazing team members

In response to the current Coronavirus outbreak, Hireserve staff are all working remotely - however all business will be conducted as usual. For any enquiries, please use our contact page or call us on 01256 634140 and one of the team will be happy to help.